The Effects Of Cancel Culture

Is Cancel Culture On The Rise? 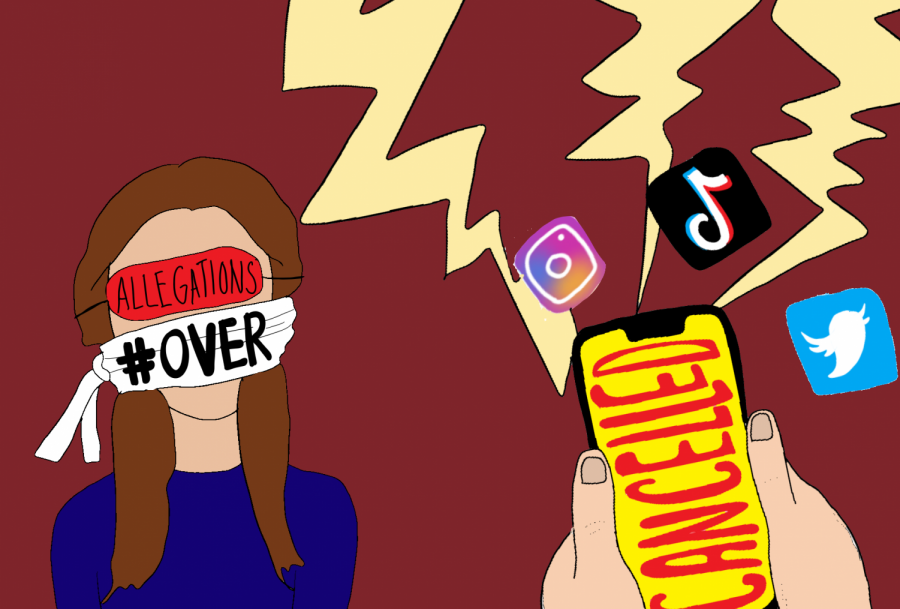 Allegations and rumors are made over social media which leads to someone being cancelled. Credits: Krisha Konchadi - The Toxic Rise of Cancel Culture – Portola Pilot

Recently, the latest drama about certain influencers and how people are starting to dislike them based off either a rumor that has been spread throughout the media or because of something that has that person has said or done in the past or present, has developed into a concept known as cancel culture.

“Cancel culture — the phenomenon of promoting the “canceling” of people, brands and even shows and movies due to what some consider to be offensive or problematic remarks or ideologies — isn’t all that new.” said writer Brooke Kato.

Cancel culture has become popular due to social media and can be argued as either a good thing for causing people to be held accountable for their mistakes that are from the present or even the past. Yet, it can be seen as a negative thing because the media is quick to cancel and not so quick to forgive or believe that people can learn from their mistakes.

“Cancel culture has created nothing but a toxic environment that is seen on all social media platforms, its seen everywhere. As a social media influencer Ive encountered many of these issues. We are the next upcoming generation after the Gen Z’s therefore we should strive for change. Nowadays you can easily be targeted for the dumbest reasons.” Sophomore Luzneida Navarro said

Some have mixed emotions about cancel culture and the way that people on social media hold influencers and celebrities accountable, it can be seen as helpful but also detrimental to the ongoing success of someone’s career and if they can deal with the negative things that are being thrown at their direction.

“I mean as everything it has its positive and negative affects; I personally do not think it should be stopped but it should be controlled and managed correctly for the public eye because there have been moments where cancel culture has been responsible for holding celebrities or just social media influencers accountable for their mistakes but at the same time those situations could have been handled in a separate way.” Sophomore Luzneida Navarro said

Even though someone might not be a “victim” of cancel culture it can still happen to them or one of their favorite social media influencers or celebrities. This can even be seen in some of people’s favorite movies or television shows and its actors.

An example of this is “The #IsOverParty is an ode to cancel culture, most recently used to cancel Jimmy Fallon after a video resurfaced of him in blackface imitating Chris Rock. While #JimmyFallonIsOverParty was quick to trend on Twitter, some users were quick to condemn his cancellation.” writer Brooke Kato said.

Cancel culture can lead to serious mental health issues especially for people that are heavily involved with social media. Social media gives people the power to voice their opinion on anyone’s life and their decisions in either a positive or negative way.

“Cancel culture can affect one’s mental health. As teens we are vulnerable to anything and everything. One comment can easily break down someone’s mindset. Hate, rage and all these emotions can be caused by cancel culture and when people on the internet pick and choose who they want to “cancel” next.” Sophomore Luzneida Navarro said.

Everyone is bound to make mistakes or have a few bumps in the road but cancel culture is teaching people that second chances aren’t an option. This is seen more commonly when a certain celebrity is getting “canceled” on social media.

“A mass public shaming, with millions of people saying you are quote-unquote canceled, is a very isolating experience, I don’t think there are that many people who can actually understand what it’s like to have millions of people hate you very loudly…When you say someone is canceled, it’s not a TV show. It’s a human being. You’re sending mass amounts of messaging to this person to either shut up, disappear, or it could also be perceived as, kill yourself.” singer Taylor Swift said.

Having thousands of people gang up on someone is causing these mental health issues that many celebrities face. It is crucial to acknowledge his or her wrongs and then work to make themselves better and learn from it. But the way that social media users choose to threaten and bully celebrities is creating an overall toxic environment that no one wants to be a part of.

“Cancel culture is teaching everyone one thing: if someone does something wrong, stop supporting them. Forget if they apologize or try to correct their behaviors, they should’ve known before doing it.” writer Patrice N. Douglas said

It can be shown that holding someone accountable for their mistakes is a productive way to seek change in society, but many believe that cancel culture is not a healthy way to shine light on one’s poor choices because it doesn’t allow someone to grow or learn from those either former or current pitfalls.

“Public figures are human beings too and deserve the same decency and forgiveness that we’ve all been given by the people around us...Celebrities are afraid of saying anything out of place for fear that people will take it the wrong way and deem them worthless. Cancel culture causes people to feel isolated and lonely. Cancel culture causes people to deal with depression and anxiety. It forces celebrities to feel completely alone. It makes them feel like nobody will ever want to be bothered with them ever.” author Victoria D. said

Learning the whole story or doing background research is crucial when thinking about contributing to the cancellation of someone. Without knowing all the information of a certain situation, he or she is allowing the media to influence their viewpoint, which isn’t very helpful when someone is getting “canceled”.

“Before “canceling” someone we must know all the facts and the point of view from the person you want to “cancel”. In the end, everyone has their own opinions and way of life, that overall, we must respect.” journalist Lillian Phillip’s said.