The Pandemic Significantly Altered the Lives and Personalities of Students 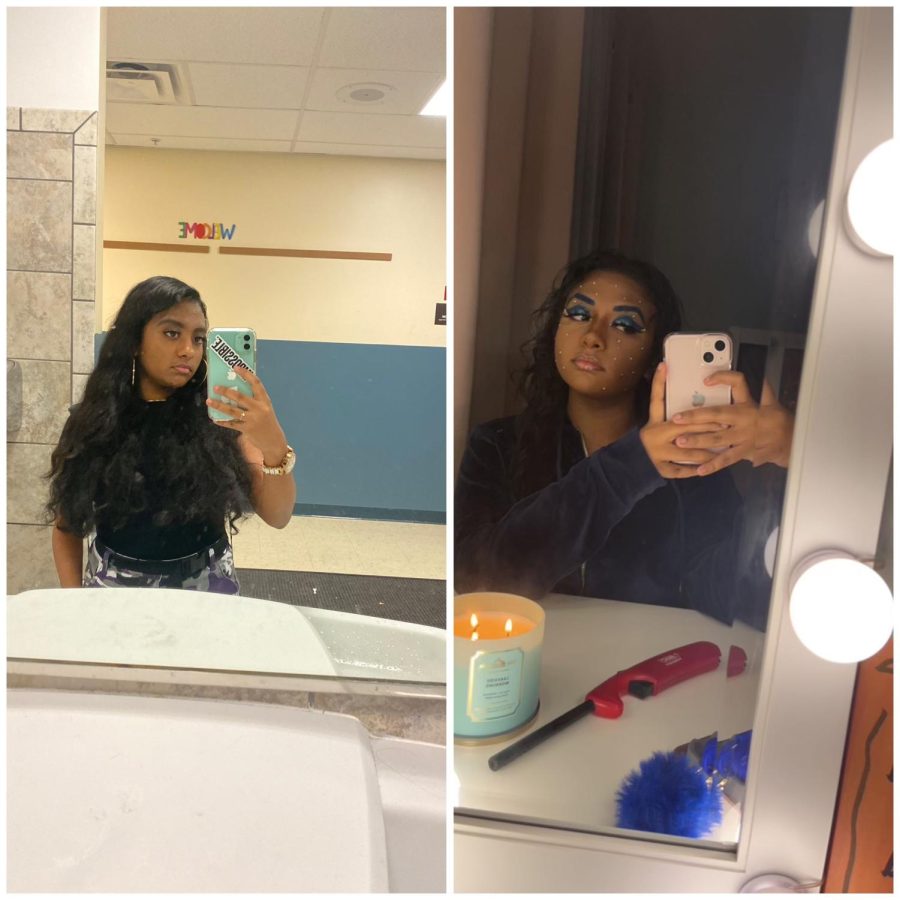 Junior Emily Nagassar shows her transformation from when Covid-19 first emerged to now.

Over two years have passed since Covid-19 was declared a pandemic and students reflect on how the earlier months of quarantine changed them.

The initial months of quarantine were rife with hopes for a speedy recovery from Covid-19, mixed with uncertainty of what exactly could be done to address it. This uncertainty meant that many people were not initially concerned.

The state of Florida reported its first Covid-19 cases on March 1st, 2020 and one month later, Governor Ron DeSantis declared it a public health emergency. For Berdiji specifically, he was most of the way through the eighth grade when he entered lockdown.

The ‘like system’ was a method of taking attendance during the end of the 2019-2020 school year. Students would like a post to show the teacher they were online. This system is indicative of the lack of structure online school had. This loss resulted in the loss of the many small social interactions people usually experienced in the school day.

Some students – including Berdiji – found the first few months to be relentlessly monotonous. The same tasks every single day became boring over time, a feeling that is difficult to shake even after returning to school.

“I do the same thing every day. I wake up, eat the same thing, I put on my clothes. The same routine. Every morning I go to class, the same thing happens. Basically every class I talk to the same people. I do the same thing in class. Then eventually I come home, do the same thing at home, play on my computer, go to bed. That’s it. It just repeats every single day. And it’s just not fun anymore. It’s just boring. I just find myself doing it to have something to do just to pass the time,” Berdiji shared.

Although some people found quarantine to be the perfect time to pick up new hobbies, as evidenced by the number of videos and articles about people learning new skills, for some the free time was spent the same way it was before, like Berdiji. For Jane Doe* this was somewhat true, as she spent early quarantine improving on skills she already possessed.

“I actually didn’t pick up that many new habits. A lot of them were just habits I already had. I worked on art. I worked on writing things that I do in my free time anyway. I actually specifically remember seeing a TikTok  where people were like: ‘Start a diary through COVID, so you can remember this time in your life and see what you spent it doing!’. And it was like the first month and I just remember sitting there thinking, this isn’t going to be more than like, a month or two. So I didn’t do it. And then, like three months into COVID, I saw it again, like another one. And I was like, it’s bound to stop any day now, right?” Doe said.

It would not stop anytime soon though, and because of the pandemic many students were obliged either to find a way to communicate or minimize their personal contact outside their house. Relationships either deteriorated or strengthened while being isolated and further affected them after the quarantine was lifted.

“Everybody kind of already had these new inside jokes and new new relationships and new friendships. And it was really weird. Because in my head these were still my friends that I made, but they kind of went on and had a year’s worth of friendship that I kind of missed out on,” Doe explained. “So while COVID did make me more social because I actually had to go out of my way to text people when I was at home, and they weren’t it was also just really really weird trying to rebuild those friendships that everybody else had had time to build.”

Even though quarantine itself severely damaged the social lives of some students initially, the end of the lockdown forced many students out of their comfort zones. The result was improved social skills.

“I actually became more social after quarantine. I’m a big introvert. I still am. So before quarantine, I was like, sticking to my little group, I would hide in the corner. I would just do me, I really wouldn’t care. And then after being deprived from people for so long, and quarantined when I came back, I was like, Screw it. It’s my senior year now. And if anything were to happen, why shouldn’t I just go out and do whatever I wanted? I think my social skills really developed and I got better,” Senior Leah Rodriguez shared.

There have also been cases where teenagers have lost friendships or relationships that have had a significant impact on students’ social life and mental health. Many students learn and develop through broken relationships, whether they ended painfully or peacefully. When it comes to maturing and adopting good coping skills, relationships are essential to learning through experience.

For generations, school has had an impact on students’ mental health. The quarantine has had various consequences on kids’ capacity to maintain decent mental health while keeping up with schoolwork.

“I took all those feelings and I shoved them away and shoved a new person in front. So I would like to hide it away and be like, you’re okay, you for now. Just work it and so I would pretend to be okay,” Leah Rodriguez said.

For many students, their academics underwent a major shift early in the pandemic. Testing was canceled, many students found that they had concerns far more pressing than their grade point average. The total or partial loss of motivation led to a decrease in academic performance for some students.

“My academics and my grades sank, like they were worse than the Titanic. It was. It was so bad. It is really, really hard to stay motivated in schoolwork. When you’re already struggling with mental health things, you’re struggling with the fact that it’s a global pandemic and switching to online school, where not to diss the school, but like half the teachers don’t care or don’t know how to work programs or don’t communicate well, it’s really, really hard,” Doe said.

Mental health has always had a major effect on academics, but Covid-19 exacerbated this and for already struggling students – like Doe –  was burn out. Doe felt themselves approaching ‘gifted kid burn out’ already, a phenomenon defined as a previously high achieving student struggling due to factors like pressure or mental health.

“I was already on the verge of like, having, you know, gifted kid burnout. But it really, really hit when COVID hit. Because going back to like sitting at the table with my little siblings as they have their videos playing and the kitchen,” Doe said. “The timer on the oven is going off and the fan is whirring and just all the little noises and movements and the homework and not being able to talk to your friends to get help on homework and the teachers not tearing it just all mixed together to ruin my grades.”

Even for students that were not concerned about their academics prior to Covid-19, some found themselves developing procrastination habits due to the sudden laxity of deadlines. While this may not have caused academic issues at the time, reentering school as the world returns to normal means that this procrastination is suddenly reflected on report cards.

Dropping grades are not the only reality for high school students that are reentering school after the initial quarantine, though. Rodriguez found that coming back to school helped her learn better, as she is a visual learner.

“So being in here, being able to see the teachers explain it, being like one on one, solving it on the board and actually being able to go up to the teacher and talk to them instead of having to wait for them to email me back is definitely better,” Rodriguez said.

Despite the world’s slow crawl back to normal the pandemic is far from over. As recently as May 16th, 2022, 147,834 new cases were diagnosed. Many families are still facing great loss because of the virus, although many students are returning to their regular lives.

“It’s hard like (the) ‘new normal’ as people say, but I would definitely say it has taken a negative toll especially since we’re just getting out of the stage and nobody understands like, hey, it takes time to get used to this again, since this is not our normal life. (It) is still around and people are still dying from it,” Nagassar said.