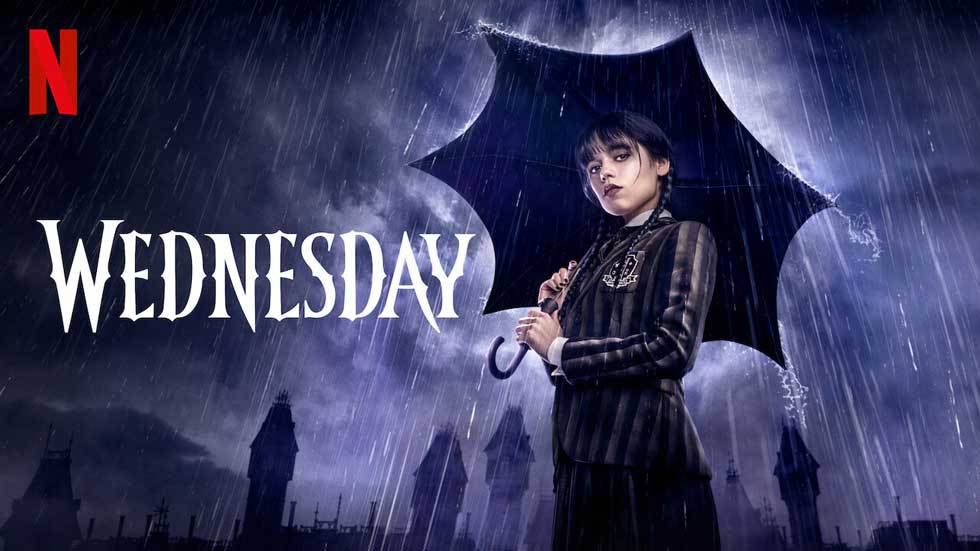 On Wednesdays We Wear Black

There is no doubt Netflix’s Wednesday is attracting teen audiences everywhere, making it a big hit on the platform. Wednesday Addams’ style as well as actress Jenna Ortega’s performance as the protagonist has made plenty of people interested in the inspiration behind the dark and brooding character. A lot of said inspiration behind Wednesday’s outfits and even THAT iconic dance scene stems from the subculture Goth, which tons of students have all heard of, but most do not know much about.

The music-based subculture known as “Goth” emerged in the United Kingdom in the early 1980s through young adults and teenagers who embraced a specific dark aesthetic for music, dress, and physical presentation in accordance with punk-esque clothing (ripped fishnets, combat boots, heavy makeup). Since then, many diverse “types” of Goths have come out that all follow different styles, yet still hold that dark base. You have most likely passed another classmate who identified as Goth, or maybe you are a goth student yourself, either way you probably have ties to the subculture.

Sophomore Victoria Fernandes explains the reasons as to why she got into the Goth style: “First would be my admiration for the Victorian and Edwardian era because it fits well with being gothic, and the second reason is music. What primarily got me into this style was listening to alternative and punk rock, as the artists dress Gothic as well. The style makes me feel confident.”

The Gothic Styles that inspired Wednesday

Although in the series Wednesday Addams dawn a variety of black and white and grey outfits (Unlike her 1991 counterpart who remains in the same outfit for The Addams Family), we still were able to see her in that iconic white collar and dark button up dress associated with the character. The dress itself gives a Victorian Gothic feel, with its puffed-up sleeves and collar dating back to the late 1700s and early 1800s that Victorian Goths base their style on. In the first episode, “Wednesdays Child is Full of Woe” Wednesday is shown in an oversized black hoodie, knee high striped socks, and Naked Wolfe platform sneakers. This outfit is modern goth, being more minimalistic and casual, while still portraying a dark aesthetic. We see many other modern goth outfit examples during the show.

“Seeing how they made Wednesday’s outfits look new and modern while still making her look classic was… refreshing to say the least. I see that ‘90s’ Wednesday Addams mixed with things we’d wear today,” Junior Sacadi Powell stated.

One of the biggest moments in the show is in the fourth episode, “Woe What a Night.” In this episode we see Wednesday break out of her shell and dance in an ankle length, ruffled black dress to the song “Goo Goo Muck” by The Cramps. The high collar and flared ruffled sleeves give off a romantic goth feel because of its Victorian look, and it is one of the most memorable outfits in the series.

In a Harper’s Bazaar interview with costume designer Colleen Atwood, she explains how she came across the dress and why she chose it, “It’s an Alaïa I found on a mannequin on Bond Street in London. I made my assistant put it on in the store. It’s this fabric that moves and does its job in such a great way, that you usually see on dance costumes. It has these sheer layers that have so much life, so it doesn’t just hang there like a chiffon dress. It moves really beautifully.”

When it comes to the dance itself, it is said that Jenna Ortega choreographed the entire thing herself. To get to that point, Jenna states in an interview with Vulture, “I just pulled inspiration from videos of goth kids dancing in clubs in the ’80s, Lene Lovich music videos, Siouxsie and the Banshees performances, and Fosse.” Jenna posted videos of Goths dancing in the 80s after the scene became viral, and we see many similarities with Wednesday’s dance.

Wednesday on Netflix has become a teen hit, no one is complaining. Season two is sure to hit the audience with even more styles and inspirations and highschoolers everywhere are excited to see what comes next.